"Liassaurus" involves somewhat difficult decisions in regard to Sarcosaurus and the relationships of both taxa, so here's Dilophosaurus "breedorum" first.

Comments- The incomplete skeleton UCMP 77270 was discovered in 1964 which was initially mentioned by Welles (1970) as a larger specimen of Dilophosaurus wetherilli. This was the first specimen of the genus to preserve a nearly complete cranial crest, the bases of which had been preserved but unnoticed in the holotype. Welles later (1984) believed UCMP 77270 to be a new related genus of theropod based on undescribed differences in skull proportions, vertebrae and especially the femur. Gauthier (1986) retained the specimen in D. wetherilli and stated Welles had remarked on its trochanteric shelf in 1984, yet as Charig and Milner (1990) noted, Gauthier was mistaken and Welles never described the femur of the specimen. Rowe and Gauthier (1990) also referred it to D. wetherilli and incorrectly stated it was of similar ontogenetic stage as the holotype. Paul (1988) was not certain whether it was the same species or not, but noted the differences might be due to the same kind of dimorphism that coelophysids show. Welles wrote a description of UCMP 77270 in which he names it Dilophosaurus breedorum, which was eventually released by Pickering in 1995. This paper has controversial status, as it describes the only one of Pickering's taxa to be accepted as valid by another paleontologist (Olshevsky, DML online 1999). Olshevsky noted that the publication had no evidence of following ICZN Articles 8.1.2 and 8.1.3, but considered D. "breedorum" valid on the condition that Pickering could supply copies in response to orders. While I have received a copy from Pickering, he has refused to send them to several other workers or to archive them in public libraries. Thus Olshevsky's condition has been only partially met, and whether he still considers the species to be valid is unknown. Other workers such as Ford (Paleofile.com) consider "breedorum" a nomen nudum. Incidentally, Olshevsky used the date 1999 for the "breedorum" paper and stated 1995 "must be a manuscript date, since the description was not published then and has only appeared through Pickering's efforts this year (1999)." I personally do not doubt Pickering printed the "breedorum" paper in 1995, though its distribution at that time is questionable. I provisionally accept the 1995 date here, though I also consider the taxon a nomen nudum under Article 8.1. Note that contra Olshevsky, if the "breedorum" paper is accepted as valid under the ICZN, "Newtonsaurus" and "Walkersaurus" from the comparative section would also be valid. In any case, "breedorum" was definitely used in Pickering's 1995 bibliographic work "Jurassic Park: Unauthorized Jewish Fractals in Philopatry" as a nomen nudum. In that work, the name is a label for a photograph of UCMP 77270's skull. Gay (2005) believed it was a specimen of D. wetherilli, feeling there is a "lack of significant morphological differences" and considered "breedorum" invalid, noting "uncertain validity of this name resulting from publication practices." Gay refers to two femora of differing lengths (575, 605 mm) and two tibiae (560, 585 mm), believing more than one individual might be involved, but Welles states only the right hindlimb is preserved. Tykoski (2005) used the specimen as an example of D. wetherilli in his thesis and concluded it was an adult (unlike the types and TMM 43646) using an ontogenetic analysis. He states "at the behest of Kevin Padian (pers. comm., April, 2003) I refrain from giving a description of the crest morphology in the skull of UCMP 77270", perhaps indicating Padian or someone else is working on a new description of this specimen. Tykoski also states the quadratojugal, quadrate, sacral centra, distal pubis and metatarsals are not present in the specimen, which may mean they were lost after Welles' description. However, he notes a fibula is present, which is not mentioned by Welles. Tykoski further states the cervical ribs of UCMP 77270 are not fused to their vertebrae, contra Welles and Pickering. Irmis (2007) referred it to D. wetherilli and noted it had closed dorsal and proximal caudal neurocentral sutures, unlike the holotype. Madsen and Welles (2000), Yates (2005), Sampson and Witmer (2007), Smith et al. (2007) and Carrano and Sampson (2008) all assigned it to D. wetherilli without comment. 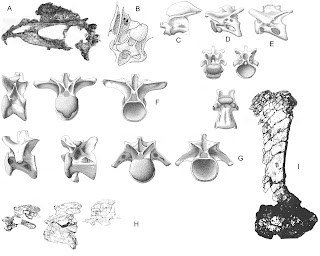 UCMP 77270, intended holotype of Dilophosaurus "breedorum"- A skull; B braincase in ventrolateral view; C atlas and axis; D fifth cervical in lateral top, anterior left, posterior right and ventral bottom views; E sixth cervical; F ninth cervical in lateral, anterior and posterior views; G tenth cervical in lateral, ventrolateral, anterior and posterior views; H ninth, tenth and eleventh dorsals; I scapulocoracoid (all after Welles and Pickering, 1995; A, H and I modified).
Welles and Pickering diagnosed Dilophosaurus "breedorum" compared to D. wetherilli using several characters. Assessing their validity is made difficult by UCMP 77270 being older than the types (based on neurocentral fusion if nothing else) and some of Welles' (1984) description being based on casted features of the type patterned after Allosaurus. "Two, very thin, markedly developed parasagettal crests composed of the nasals + lacrimals + prefrontals" is also true in D. wetherilli, except that the participation of the prefrontals (on the medial surface) is uncertain due to UCMP 37302's crests being crushed together. Welles and Pickering later list the prefrontal participation as a separate autapomorphy. The dental formula only differs in having two more maxillary teeth and one less dentary tooth, which is usual individual variation in theropods. Welles and Pickering claim a separate postfrontal ossification is present in "breedorum", but state "the sutures are not obvious, and it could be absent or fused with the postorbital." Also they note the area in D. wetherilli is badly crushed, so this has little value as an apomorphy. The authors describe a deep groove along the posteroventral edge of the postorbital, which sounds similar to the condition in most megalosauroids (though I'm not sure if theirs also extends on to the posterior process). The quadratojugal has a posterolateral sulcus above the quadrate condyles and below the paraquadrate foramen. Both of these features are apparently different from the wetherilli holotype, but their significance is uncertain. Finally, Welles and Pickering state the cervical ribs are fused to their vertebrae (contra Tykoski), but this varies ontogenetically in "Megapnosaurus" kayentakatae anyway so would not be unexpected in an old Dilophosaurus individual. Being a Welles paper, most elements also include comparisons to their counterparts in D. wetherilli and other taxa. Most of these differences seem minor, though several support an adult stage of development- more elongate premaxilla, quadratojugal fused to quadrate, atlantal centrum and axial intercentrum fused to axis, deeper cervical pleurocoels, scapulocoracoid fusion, iliopubic fusion, trochanteric shelf present. Tykoski (2005) also noted other adult characters lacking in the holotype- various braincase and intersacral fusions, ilium fused to the sacrum, proximal femoral articular surfaces well developed, medial femoral epicondyle well developed, and an oblique ridge on the proximomedial fibula. Additionally, sacral central fusion was present as noted by Welles and Pickering. According to Tykoski, the interdental plates are unfused and tall in UCMP 77270 and TMM 43646, but that they are fused in UCMP 37302 and 37303. These differences cannot be explained by ontogeny and are not subject to individual variation in other taxa as far as I know. While they and some of the differences noted by Welles might suggest multiple species of Kayenta Dilophosaurus, other theropods known from large numbers of specimens (e.g. Allosaurus, Tyrannosaurus, Microraptor, Archaeopteryx) also show a high amount of morphological variation. I follow my recommendations for those taxa and only recognize a single species of Dilophosaurus, with UCMP 77270 simply being an older individual of D. wetherilli.

Gauthier, 1986. Saurischian Monophyly and the Origin of Birds. Memoires of the California Academy of Sciences. 8, 1-55.

Charig and Milner, 1990. The systematic position of Baryonyx walkeri, in the light of Gauthier's reclassification of the Theropoda. in Carpenter and Currie (eds.). Dinosaur Systematics: Approaches and Perspectives. Cambridge University Press, Cambridge. 127-140.

Welles and Pickering, 1995. An extract from: Archosauromorpha: Cladistics and osteologies. A Fractal Scaling in Dinosaurology Project. 70 pp.

Gay, 2005. Sexual dimorphism in the Early Jurassic theropod Dilophosaurus and a comparison with other related forms. In Carpenter (ed.). The Carnivorous Dinosaurs. Indiana University Press. 277-283.

Yates, 2005. A new theropod dinosaur from the Early Jurassic of South Africa and its implications for the early evolution of theropods. Palaeontologia Africana. 41, 105-122.

Mason, 2006. The thrill of the frill: Wear and tear demands restoration of a Dilophosaurus wetherilli skull, UCMP 77270. Journal of Vertebrate Paleontology. 26(3), 96A.

Irmis, 2007. Axial skeleton ontogeny in the Parasuchia (Archosauria: Pseudosuchia) and its implications for ontogenetic determination in archosaurs. Journal of Vertebrate Paleontology. 27(2), 350-361.

Smith, Makovicky, Hammer and Currie, 2007. Osteology of Cryolophosaurus ellioti (Dinosauria: Theropoda) from the Early Jurassic of Antarctica and implications for early theropod evolution. Zoological Journal of the Linnean Society. 151, 377-421.

Carrano and Sampson, 2008. The phylogeny of Ceratosauria (Dinosauria: Theropoda). Journal of Systematic Palaeontology. 6, 183-236.
Posted by Mickey Mortimer at 4:39 AM