Identity of the mysterious "Luckyraptor" plus other new birds

Last year I noticed an entry for "Luckyraptor [Anonymous] 2007 [nomen nudum]" on Olshevsky's Dinosaur Genera List, but could not find a source for the name and George didn't remember either.  Turns out my Facebook contact Shahen remembered that it was an old DML post by Harris.  He only says "_Luckyraptor eastensis_ (it doesn't say anything about gen. or sp. nov., but I ain't heard of it anywhere else and assume it's new here!)" so I went to the source and requested a scan of the entry (Zhang, 2007).  Each taxon in Zhang's book gets a fossil photo, often bad restoration, Chinese description and notably poor English translation of said description. 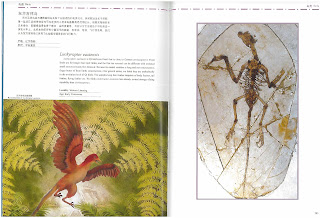 As you can see, "Luckyraptor eastensis" is based on the Jixiangornis orientalis holotype, and indeed the latter's name translates to auspicious bird from the East.  So this was just a translation error that I would hesitate to even call a nomen nudum except the -raptor- versus -ornis difference is genuine and the popularity of Olshevsky's list has led to it to be listed across the internet. 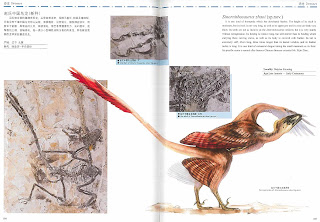 Harris mentioned three other theropod nomina nuda in Zhang's book, one of which is Sinornithosaurus "zhaoi".  Turns out that's based on QM V1002 that was later briefly described as a Microraptor gui specimen by Xing et al. (2013).  I translate Zhang's Chinese text as-

Theropod dinosaurs with more developed feathers. The skull is of moderate height, the neck is not very long, and the front jaw and beak are short. The teeth are not as sharp as Sinornithosaurus millenii, but they are thick and not degenerated. The forelimbs are correspondingly longer. The hind limbs are longer than the forelimbs, with three curved claws, and the body is feathered. The tail is very stiff and powerful. It is 45 cm long, three times the length of the dorsal vertebrae, and has a slender shaft. It is a type of theropod that feeds on small mammals. The species name is dedicated to the Chinese dinosaurologist Mr. Zhao Xijin.

However, its humerofemoral ratio (~86%) is actually shorter than the S. millenii holotype (~91%) and Microraptor teeth are typically less elongate than Sinornithosaurus'.  The slender ischium, short tibia, elongate pedal phalanx IV-4 and long leg remiges all support assigning QM V1002 to Microraptor instead of Sinornithosaurus and it is here considered a junior synonym of M. zhaoianus.  "zhaoi" and the following two taxa are nomina nuda as there is no "explicit fixation of a holotype, or syntypes" (ICZN Article 16.4.1). 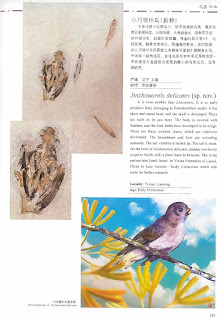 Next we have "Jinzhouornis" "delicates".  My translation is-

The primitive bird whose individual is smaller than the petite Liaoxiornis, belongs to the Enantiornithes group. The head is short and round, the skull is relatively developed, and the jaw has teeth. The outer body is feathered, and the forelimbs have become wings. There are 3 curved finger claws, which are relatively developed, the sternal keel is prominent, the caudal vertebra have fused, and the tail is short. There are two Lycoptera fossils on the slab of Jinzhouornis delicates. There is a plant fossil in the middle. This fossil is the smallest bird fossil discovered in the Late Jurassic-Early Cretaceous Yixian Formation of western Liaoning, China, and it remains to be studied. 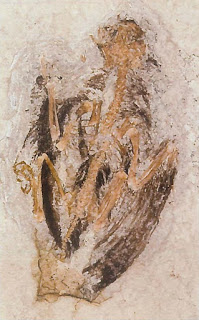 The generic assignment is odd because Jinzhouornis is a confuciusornithid (and indeed, a junior synonym of Confuciusornis), but this is stated to be an enantiornithine.  That identification seems to be correct, given the short fused premaxillae preserved left of the main skull, coracoid and humeral shape, tiny diamond-shaped sternum, and manus with short digit I and reduced ungual and seemingly long metacarpal III projecting past II.  In addition to the sternal anatomy, the poorly ossified ends of elements and stated small size strongly suggests a young age.  The description seems inaccurate in that the round head is probably due to beak elements overlapping the posterior cranium (contra the restoration), the manual unguals are not well developed or necessarily three in number, and the sternum shows no sign of a keel.  The other details are congruent with a juvenile enantiornithine, and this specimen is likely indeterminate as are most other juvenile enants (e.g. Liaoxiornis, Dalingheornis, GMV-2158 and 2159). 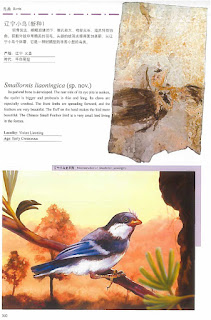 The parietal bones are well developed, the posterior edge of the orbit is concave, the eye holes are large, the beak is long, and the fingers and claws are particularly curved. The forelimbs are covered with very delicate feathers, and the down feathers on the head are more beautifully decorated. Smallornis liaoningica is a very small arboreal bird. 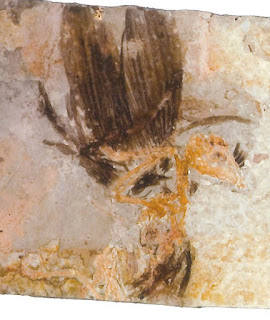 This is most of a bird skeleton, only missing one of the hindlimbs below the knee.  Unfortunately the available image quality means that it can't be determined whether this is an enantiornithine or euornithine, although the coracoid structure shows it is ornithothoracine.  Obviously none of the listed characters are diagnostic past Pennaraptora or so, but I expect enough is preserved to make it valid compared to named Jehol taxa.  Until we have a better scan, I'd say leave it as Ornithuromorpha incertae sedis.

If anyone has further information like specimen numbers, provenance or higher quality scans for "delicates" or "Smallornis", feel free to share.

Posted by Mickey Mortimer at 7:05 AM 7 comments: