Yezosaurus- when the literature is more difficult than the identification

This was quite the troublesome entry, even though the proper exact identification was already made two years ago.  I'd like to thank Rob Taylor, Wenjie Zheng and George Olshevsky for their help.

Taniwhasaurus Hector, 1874
= "Yezosaurus" Obata and Muramoto vide Muramoto, 1977 (?)
= Lakumasaurus Novas, Fernandez, Gasparini, Lirio, Nunez and Puerta, 2002
Comments- There are three or four species in this genus, one of which (T. mikasaensis) was originally believed to be a tyrannosaurid and called Yezosaurus.
References- Hector, 1874. On the fossil Reptilia of New Zealand. Transactions of the New Zealand Institute. 6, 333-358.
Novas, Fernández, Gasparini, Lirio, Nunez and Puerta, 2002. Lakumasaurus antarcticus, n. gen. et sp., a new mosasaur (Reptilia, Squamata) from the Upper Cretaceous of Antarctica. Ameghiniana. 39, 245-249. 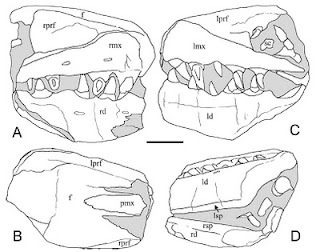 Specimen named "Yezosaurus mikasaensis" in right lateral (A), dorsal (B), left lateral (C) and ventral (D) views. Scale = 100 mm. (after Caldwell et al., 2008)
Comments- The original partial skull of "Yezosaurus mikasaensis" (originally part of Muramoto's private collection, but later designated as MCM.M0009) was discovered in 1976 and thought to be a tyrannosaurid. It has had a confusing citation history, as the West learned about from a two page photocopy in the late 1970's to early 1980's attributing it to Obata and Muramoto, 1977. This authorship and date was used by Olshevsky (1991) and Glut (1997), though neither includes a full citation, and an extensive literature search has failed to locate any such publication. The photocopy originated from a 1977 book by Muramoto and lacks a diagnosis (hence Olshevsky listing the taxon as a nomen nudum), though it's unknown if the book contains further description which could validate the genus. Thus a citation based on this reference should be Obata and Muramoto vide Muramoto, 1977. Chure and McIntosh (1989) list the authorship merely as Obata, 1977, providing a citation for a short article about Muramoto's collection. This may actually be the correct reference for the name, depending on whether it refers to the taxon and when exactly it was published. Yomiuri (1977) also wrote a book later that year about "Yezosaurus" as a dinosaur (with Osborn's Tyrannosaurus skeletal on the cover), but again the technical content remains unknown. Chure (pers. comm. in Olshevsky, 1991) identified the remains as a mosasaur, which it was later redescribed as by Caldwell et al. (2008). Those authors named it as a new species of Taniwhasaurus, retaining the species name originally given to "Yezosaurus" (though the latter is not mentioned in the paper). If any of the 1977 publications include a description which follows ICZN rules, the authorship for mikasaensis will have to change, though "Yezosaurus" would still be a junior synonym of Taniwhasaurus. The holotype is clearly not a theropod, as it lacks an antorbital fenestra and maxillary ascending process (instead having a large prefrontal laterally exposed in that space), and further differs from tyrannosaurids and most other large theropods in having premaxilla-frontal contact, an extremely low snout, and uncompressed fluted teeth with expanded roots and no serrations. While spinosaurines are most similar among theropods, even they lack expanded roots and premaxilla-frontal contact.