Patricosaurus is probably not a lizard

Comments- Patricosaurus merocratus was based on two unassociated specimens, a sacral vertebra (SMC B58402) found before 1859 and a proximal femur discovered in the 1880's. Seeley (1887) believed both belonged to the same taxon since he thought "there was little chance of any remains of two lizards occurring" in the Cambridge Greensand, but stated the femur could remain as the type if the vertebra was found to not belong to the same taxon. Barrett and Evans (2002) redescribed the specimens and referred the vertebra to Archosauria, which makes the femur the lectotype. Although they called Patricosaurus indeterminate, they also listed several features which differed from all lepidosaurs they examined. 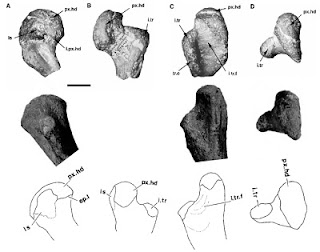 First row- Patricosaurus merocratus lectotype proximal femur in A dorsal, B anterior, C posterior and D proximal views. Scale = 10 mm. After Barrett and Evans, 2002.
Second row- Khurendukhosaurus femur in (left to right) ventral (flipped to have same outline as dorsal), posterior and proximal views. After Matsumoto et al., 2008.
Third row- Varanus in (left to right) dorsal, anterior, posterior and proximal views. After Barrett and Evans, 2002.
Seeley named the taxon as a new genus of lizard, more closely related to modern taxa than any other Cretaceous lizard known at the time, but outside the crown group. Patricosaurus was referred to Lacertilia incertae sedis without comment by most later authors as well. Barrett and Evans compared it to several modern lizard taxa, but found no characters that were phylogenetically useful in the proximal femur. Additionally, they could not distinguish it from rhynchocephalians, leaving them to classify Patricosaurus as Lepidosauria incertae sedis. Evans later (2003) listed Patricosaurus as a possible anguimorph without comment, perhaps because she and Barrett felt it was phenetically closest to terrestrial varanids. Barrett and Evans noted that the lepidosaur-like characters of Patricosaurus were symplesiomorphic for diapsids, correctly excluding it from turtles, plesiosaurs, ichthyosaurs and archosaurs. Choristoderes share the same femoral plesiomorphies as lepidosaurs, but were said to differ from Patricosaurus in having "narrower, more elongate, internal trochanter and an absence of obvious proximal muscle scars or strong muscle ridges." Yet the near contemporaneous Khurendukhosaurus does not have a narrower internal trochanter, has a rough insertional surface for the m. pubischiofemoralis externus (the dorsal surface is worn, so cannot be judged), and the length of Patricosaurus' internal trochanter is unknown as it is broken distally (unless they mean length in proximal view away from the head, in which case Khurendukhosaurus is in the range of modern lepidosaurs). Thus a relationship with choristoderes needs to be considered further. Of the characters listed by Barrett and Evans as variable in lepidosaurs, Khurendukhosaurus is less similar to Patricosaurus than some lizards in having almost no anterior curvature of its femoral head (instead the entire head is projected anteriorly as in Xantusia and Elgaria), is similar to the examined lepidosaurs in having weaker trochanteric crests (and thus a shallower intertrochanteric fossa), is more similar than most examined lepidosaurs (except Tupinambis and Cyclura) in having a small amount of separation between the internal trochanter and head, but is more similar to Patricosaurus than any examined lepidosaur in having a teardrop-shaped head in proximal view and in having the anteroposterior width be >95% of the dorsoventral width in proximal view. Cteniogenys (perhaps the choristodere Evans compared, as she previously redescribed it) is dissimilar in the latter three ways, while Pachystropheus is quite different in the proximally flattened head, distally placed interior trochanter and other features. Pending comparison to a greater variety of lepidosaurs (including fossil taxa), Patricosaurus is provisionally considered more likely to be a choristodere, perhaps closer to neochoristoderes than Cteniogenys.

Olshevsky (1991) stated Patricosaurus was probably an indeterminate small theropod, citing personal communication from Molnar. However, Molnar stated (pers. comm., 2001) that while he was not convinced it is a lizard, he did not think it was a theropod or even an archosaur. Thus there was a misunderstanding, and no one actually ever considered Patricosaurus to be dinosaurian based on evidence. As Barrett and Evans stated, Patricosaurus cannot be an archosaur because members of that clade have lost the intertrochanteric fossa and internal trochanter. Similarly, there is no anterior or greater trochanter, unlike theropods.

References- Seeley, 1887. On Patricosaurus merocratus, Seeley, a lizard from the Cambridge Greensand, preserved in the Woodwardian Museum of the University of Cambridge. Quarterly Journal of the Geological Society of London. 43, 216-220.