Owen received the partial hindlimbs BMNH 39496 and GSM 109560 in 1858 and used them as the basis for his dinosaur genus Scelidosaurus in an encyclopedia entry the following year. While this is often claimed to be an nomen nudum (e.g. Newman, 1968), genus names published before 1931 do not require species names or illustrations to be valid (ICZN Article 12). Owen later (1861) gave his taxon the species name harrisonii and described it in detail, referring the ungual GSM 109561, a partial postcranium in the Lyme Regis Museum, and the skull of BMNH R1111. Lydekker (1888) made BMNH 39496 the type specimen, though the basal thyreophoran BMNH R1111 (whose postcranium was soon found and described in 1862) formed the basis for peoples' ideas of Scelidosaurus. Newman (1968) believed BMNH 39496 and GSM 109560 to be megalosaurids, and possibly GSM 109561 as well. However, they were only compared to Megalosaurus among theropods, making this familial assignment in need of verification. As the name Scelidosaurus had been associated with the thyreophoran, Charig and Newman (1994) petitioned the ICZN to recognize BMNH R1111 as the lectotype, which was accepted in 1994 as Opinion 1788. Pickering (1995) credited the name Merosaurus newmani to Welles, Powell and Pickering in an unpublished bibliographic manuscript. This is a nomen nudum however, as he didn't follow ICZN Article 8.1.3- it must have been produced in an edition containing simultaneously obtainable copies by a method that assures numerous identical and durable copies. The name may date from the English megalosaur redescription of Welles and Powell from the 1970's which was never published. Olshevsky (DML, 1999) believed "Merosaurus" referred to BMNH 29496, and statements by Pickering on a private newsgroup in 2005 confirmed it is based on this specimen and GSM 109560. He referred to BMNH 39496 as the type, comparing it favorably to Sarcosaurus, Dilophosaurus and Ceratosaurus in morphology. Pickering will presumably describe it in his in progress work Mutanda Dinosaurologica. Carrano and Sampson (2004) stated BMNH 29496 probably belongs to a basal tetanurine without explanation, but viewed it as indeterminate. Naish and Martill (2007) referred all three specimens to Tetanurae without comment. Most recently, Benson (2009, 2010) redescribed BMNH 39496 and GSM 109560. He found BMNH 39496 to be a coelophysoid when entered in his matrix, but noted that non-tetanurines were poorly sampled so this may not mean much. Benson considered it to be Theropoda incertae sedis, and the other two specimens to be indeterminate theropods.

Comments- BMNH 39496 consists of a distal femur, proximal tibia and a proximal fibula which has been lost subsequent to Newman's description. Both Pickering and Benson proposed the lack of a deep extensor groove as a non-tetanurine character, but this is true in some basal tetanurines (Chuandongocoelurus), megalosauroids (Dubreuillosaurus, Eustreptospondylus, "Brontoraptor") and most coelurosaurs. Contra Pickering, the popliteal notch is concave and the ectocondyle elliptical and posterolaterally directed even in tetanurines like Megalosaurus and Eustreptospondylus. Benson claims the fibular crest which extends to the lateral condyle is a non-tetanurine character, but this is also found in Afrovenator, Megalosaurus and Gasosaurus. One feature of the tibia might suggest this specimen is a tetanurine- the fibular crest is bulbous as in Piatnitzkysaurus, Megalosaurus and Sinraptor. However, including BMNH 39496 in my saurischian supermatrix results in equally parsimonious trees where it is in Coelophysoidea or non-avetheropod Tetanurae. Morphologies in the preserved areas are not consistantly variable between these groups, making further identification difficult. Thus it is here assigned to Avepoda incertae sedis.

Comments- GSM 109560 is based on a femur lacking the head and distal end, and a tibial shaft which was not illustrated by Owen and has been lost. Contra Owen and Pickering, there is no reason to refer this to the same taxon as BMNH 39496 as they share only a short area of distal shaft, and the GSM specimen is only ~60% as large. Also contra Pickering, the anterior trochanter is not conical but is lateromedially narrower than anteroposteriorly, making it alariform. The specimen is not a robust coelophysoid or ceratosaur individual based on the absence of a ridge-like trochanteric shelf. It is most similar to Liliensternus, Dilophosaurus, Ceratosaurus and tetanurines in having a straight shaft in anterior view. The anteroposterior width of the anterior trochanter seems less than in tetanurines, but greater than basal coelophysoids. It may be a gracile morph of ceratosaur. 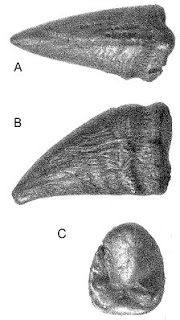 Comments- The ungual GSM 109561 was not associated with BMNH 39496 or GSM 109560 and was not necessarily assigned to "Merosaurus" by Pickering. Newman stated it was "possibly the terminal phalange of the first digit of a megalosaurian", while Benson believed it to be an indeterminate theropod. However, compared to basal theropod pedal unguals, GSM 109561 is much straighter, stouter, broader and lacks the dorsal overhang on its proximal surface. A closer resemblence is seen to pedal unguals of basal massopods like Blikanasaurus and Jingshanosaurus. It is here provisionally referred to that clade.

Carrano and Sampson, 2004. A review of coelophysoids (Dinosauria: Theropoda) from the Early Jurassic of Europe, with comments on the late history of the Coelophysoidea. Neues Jahrbuch fur Geologie und Palaontologie Monatshefte. 2004, 537-558.

Benson, 2010. The osteology of Magnosaurus nethercombensis (Dinosauria, Theropoda) from the Bajocian (Middle Jurassic) of the United Kingdom and a re-examination of the oldest records of tetanurans. Journal of Systematic Palaeontology. 8(1), 131-146.

Pickering, in prep. Mutanda Dinosaurologica.
Posted by Mickey Mortimer at 2:59 AM