Part 2 of Pickering's taxa.  The comments on all these are going to have a similar section of course, since they all involve the same collection of Pickering manuscripts.

Comments- Owen (1857) originally described Megalosaurus ilia as coracoids, noting three specimens were in the BMNH and figuring one. Lydekker (1888) recognized these as ilia and incorrectly listed the one illustrated by Owen as BMNH 31811, though Pickering (DML, 2002) notes it is actually BMNH R1100. BMNH 31811 remained as a specimen of Megalosaurus bucklandii until Pickering credited the name Metriacanthosaurus brevis to English theropod material in his 1995 unpublished bibliographic manuscript. It was later used in the comparative section of another unpublished manuscript (Welles and Pickering, 1999). This paper was largely extracted from the European megalosaur manuscript Welles and Powell worked on in the 1970s but never published, specifically the Megalosaurus redescription section. Pickering intends to publish an updated version of the megalosaur manuscript as Mutanda Dinosaurologica, and has posted small excerpts including the diagnosis of Metriacanthosaurus "brevis" online (DML, 2002). In any case, the name is a nomen nudum as Pickering didn't follow ICZN Article 7 Recommendation 7a, Article 8a or Recommendation 8A. Pickering says of M. "brevis" and Metriacanthosaurus parkeri, "their great height and shortness -- diagnostic for Metriacanthosaurus -- separates them from ilia of Megalosaurus bucklandii and Allosaurus." Additionally, Allain and Chure (2002) stated BMNH 31811 and R1100 (misidentified as OUM J13560) are "quite different from one another in shape in proportions." However, Day and Barrett (2004) found the shortness was an illusion caused by a broken postacetabular process and a plaster reconstructed preacetabular process. Benson (2009) agreed and also found it shared an autapomorphy with other M. bucklandii ilia- a series of posterodorsally oriented ridges that give the posterior part of the median ridge an undulating texture. Indeed, the characters Pickering lists as distinguishing M. "brevis" from M. parkeri are largely also those that distinguish M. bucklandii from M. parkeri (nearly straight upper margin; taller preacetabular process), or don't distinguish M. "brevis" from M. bucklandii (narrower notch between preacetabular process and pubic peduncle; longer, lower acetabulum; 250 mm long). So I see no reason to support M. "brevis" and synonymize it with M. bucklandii. 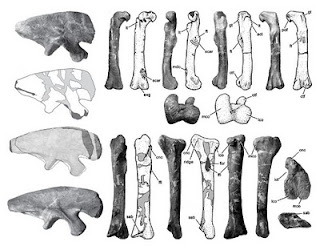 Top left- photo and line drawing of intended holotype of Metriacanthosaurus "brevis" BMNH 31811 (after Benson, 2009).
Bottom left- Megalosaurus bucklandii ilium OUM J13560 (after Benson, 2009) and superimposed image of it and "brevis" specimen to show similarity except for broken ends.
Top right- Metriacanthosaurus "brevis" referred femur BMNH 31806 in anterior, mdial, lateral, posterior and distal views (after Benson, 2010).
Bottom right- Metriacanthosaurus "brevis" referred tibia BMNH 31809 in anterior, lateral, posterior, medial, proximal and distal views (after Benson, 2010).
Pickering also referred several other specimens to M. "brevis". OUM J29888 is a pectoral girdle which Day and Barrett and Benson couldn't distinguish from M. bucklandii. BMNH 31806 is a femur which Allain and Chure stated differs from the paralectotype in being straight with a medially directed head. Day and Barrett (2004) used this as the basis for their morphotype A femora, but Benson (2009) found the head orientation to be individual variation and the curvature of type B femora to be taphonomic. Additional differences between morphotype A and B femora were also found to be preservational or individual variation (see below), and Benson (2009, 2010) referred both types to M. bucklandii. Ironically, M. parkeri's femur has a sigmoid shaft, though it does have a medially directed head. BMNH 31809 and OUM J13562 are tibiae which Benson (2009, 2010) referred to M. bucklandii and which share a bulbous fibular crest with that taxon. BMNH 31809 differs from M. parkeri in having a smaller cnemial crest which is not as laterally angled and a smaller and more laterally placed fibular crest. Thus all supposed Metriacanthosaurus "brevis" material is referrable to Megalosaurus bucklandii and does not bear particular resemblence to Metriacanthosaurus itself. Coincidentally, BMNH 31806 and 31809 are the femur and tibia illustrated as examples of those elements in Benson's (2010) redescription of M. bucklandii, though the other tibia and the pectoral girdle remain unillustrated.

Allain and Chure, 2002. Poekilopleuron bucklandii, the theropod dinosaur from the Middle Jurassic (Bathonian) of Normandy. Palaeontology. 45, 1107-1121.

Day and Barrett, 2004. Material Referred to Megalosaurus (Dinosauria: Theropoda) from the Middle Jurassic of Stonesfield, Oxfordshire, England: one taxon or two? Proceedings of the Geologists' Association. 115, 359-366.
Galton and Molnar, 2005. Tibiae of small theropod dinosaurs from Southern England, from the Middle Jurassic of Stonesfield near Oxford and the Lower Cretaceous of the Isle of Wight: In Carpenter (ed). The Carnivorous Dinosaurs. 3-22.

Benson, 2009. An assessment of variability in theropod dinosaur remains from the Bathonian (Middle Jurassic) of Stonesfield and New Park Quarry, UK and taxonomic implications for Megalosaurus bucklandii and Iliosuchus incognitus. Palaeontology. 52(4), 857-877.

Benson, 2010. A description of Megalosaurus bucklandii (Dinosauria: Theropoda) from the Bathonian of the UK and the relationships of Middle Jurassic theropods. Zoological Journal of the Linnean Society. DOI 10.1111/j.1096-3642.2009.00569.x