Pickering's papers in hand- A review

Continuing Pickering Month, I thought I'd take a break from the "Liassaurus" entry to write a different kind of post.  Stephan sent me copies of several of his papers this week, which means I'm one of a handful of people to own them.  Many of you are probably wondering just what does a Pickering paper look like?  Well now's your chance to find out.  I'd also like to thank Stephan for (finally) sending me the papers, as it took quite a bit of time on his part.  So, the papers I received can be divided into a few categories.

One is an in progress version (from 2003) of his bibliography of Richard Owen, with illustrations by Knight and Stout.  Simple enough.

Another is a flier for Mutanda Dinosaurologica, Pickering's in progress book.  This lists the species covered in the book, which consists of all the standard Pickering theropods, as well as Liliensternus, Sarcosaurus, Elaphrosaurus, Magnosaurus as Megalosaurus nethercombensis, Megalosaurus bucklandii, Eustreptospondylus, Metriacanthosaurus parkeri, Streptospondylus, Poekilopleuron and Proceratosaurus.  Presumably these were the taxa redescribed by Welles and Powell for their European theropod review which was never published, and I assume that the Extract from Archosauromorpha papers described below are basically the kind of content that will be included (albeit with possible revisions) if Pickering ever publishes. 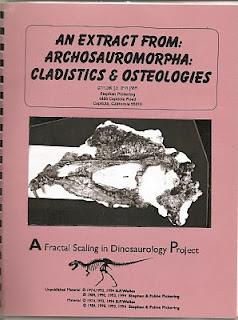 Cover of volume about Dilophosaurus "breedorum."
Six are titled "An Extract from: Archosauromorpha: Cladistics and Osteologies".  Two such papers were mentioned by Olshevsky on the DML, about Dilophosaurus "breedorum" and Megalosaurus bucklandii.  Pickering has not sent me the latter yet.  The others I received are- "Merosaurus", Elaphrosaurus? "philtippettensis", "Altispinax" "lydekkerhueneorum", "Walkersaurus" and Maleevosaurus.  Two (about Maleevosaurus and "Altispinax") are stated to be volume 14, the others lack numbers.  They all begin with photocopied copyright certificates, though of course no one doubts much of the material was written by Welles and Powell in 1974, 1993, etc..  The problem is that the ICZN doesn't care about copyright, but rather whether it's "produced in an edition containing simultaneously obtainable copies by a method that assures numerous identical and durable copies."  The content itself is basically what you see from Pickering in his comments here- basic info, lists of previous references to the specimen in the literature, generally problematic diagnoses, then a very Welles-ian description.  You'll recognize the format if you've read Welles' 1984 Dilophosaurus osteology- descriptions of each element focusing on measurements of landmarks, followed by comparisons to similar taxa but without any phylogenetic context.  The Maleevosaurus paper breaks the mold a bit in that it has an extensive set of measurement tables instead of a description.  There are quite a few original photos taken by Welles in 1974 I presume, and original illustrations of Dilophosaurus and the "Merosaurus" type femur.  The other line drawings are taken from previously published sources.  One common issue I have with these taxa is several are based on non-overlapping elements with no justification for their referral.  I've already noted this for "Merosaurus" for instance, but the Altispinax paper is a particularily egregious example.  The proposed lectotype is the Becklespinax holotype of three high-spined dorsals.  Yet referred specimens include teeth, metatcarpals, metatarsals (such as the Valdoraptor holotype), pedal phalanges, etc..  Pickering doesn't identify the taxon past Tetanurae, so can't even use a rationale like Benson's that the large Taynton Limestone theropod material is all megalosaurid or compatible with such an identification.  Similar issues are seeimingly true for "brevis", "reynoldsi" and "philtippettensis". 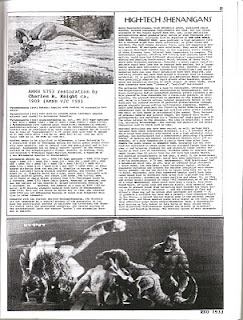 Page 12 of King Kong: Unauthorized Jewish Fractals in Philopatry, including section naming Allosaurus "whitei" and Tyrannosaurus "stanwinstonorum."
The final object is a pamphlet that I believe was distributed with an issue of Prehistoric Times in 1996, which gives it the highest and most official distribution of any Pickering work.  This is the famous "King Kong: Unauthorized Jewish Fractals in Philopatry. A Fractal Scaling in Dinosaurology Project."  It's thirteen pages long, and is quite Pickering-esque if I do say so.  The first four pages are confusingly labeled as advertisements, though they don't differ qualitatively from the rest.  Large pictures relating to Jurassic Park 2: The Lost World and King Kong are strewn throughout, and the text is divided into nine chapters, a prologue (between chapters 6 and 7), a postscript and an epilogue.  The first six chapters are commentary on The Lost World, while the prologue and chapters 7-9 are commentary on King Kong.  They are not scientific writings by any means, though they would be fine (if verbose) articles in a theater magazine.  The postscript is partly a speculation of dinosaur mating habits based on birds, which is flawed by the large (almost total) amount of speculation and the author's well known habit of calling all birds dinosaurs.  So we get "spotted sandpiper dinosaurs" and "Scandinavian pied-flycatcher-dinosaurs."  Not that this is inaccurate, it's simply tedious and redundant, much as African elephant mammals and alligator snapping-turtle-reptiles would be.  There's another paragraph about such varied topics as ceratopsian limb posture and sauropod metabolism, but the interesting portion of the postscript is that titled Freud's Door (though it is not about Freud at all).  By way of a criticism of certain phylogenetic practices, Pickering lists "the superspecies of Tyrannosaurus" including T. [rex] bataar, T. [rex] rex, and T. [rex] stanwinstonorum followed by diagnoses for each.  I'm really not sure what a superspecies is, nor what his bracketed notation indicates, but in any case the diagnosis for "stanwinstonorum" is based on characters which are probably individual variation (larger body size than T. rex; reduced nasal rugosities), incorrect (palatine recess absent; rugosity absent on ventral pterygoid wing of palatine; supradentary absent), or ambiguous (reduced postorbital-orbital joint). Pickering also mentions Allosaurus and provides a diagnosis of A. "whitei", which as Chure (2000) notes in detail is invalid for the same reason Paul's version of A. atrox and Bakker's version of Creosaurus are.  Finally, the Epilogue consists of a taxonomic criticism, leading the reader to his erection of a new species of Ceratosaurus- C. "willisobrienorum."  It turns out this is based on both the holotype of C. magnicornis (the proposed type of Pickering's species) AND C. dentisulcatus.  I have no opinion on the taxonomy of Ceratosaurus at the moment, as I have not studied the issue.  This is directly followed by a more opaque concluding paragraph which has been partially quoted by Chure in his thesis ("Multiple levels of ebbulient perception inundate one's post-Obie existence, as the epochal significance of King Kong is to be firmly positioned in the imagi-nation..."), involving theater, Judaism and the like.

My final judgement is a mixed bag.  The osteologies contain much useful information, though I prefer Benson's descriptive method, explanatory line drawings and phylogenetic context.  Of course Welles wrote much of it in the 70's and 80's, so the lack of much phylogenetic context isn't surprising.  The taxonomic and specimen referrals are often undefended and problematic, which is another downfall.  Much of "King Kong: Unauthorized Jewish Fractals in Philopatry" isn't as bad as it's been made out to be- for a pair of movie commentaries.  It's usually readable, if that sort of thing interests you.  But it's not anything you'd find in a technical journal, and the dinosaur sections lack a common theme.  They might be appropriate for Prehistoric Times, though I think there's too much speculation and too little evidence to back it up.  Pickering's idiosyncratic terminology for birds also elicits eye rolls after a while.  The new names proposed in this paper seem like afterthoughts.  They merit a name, material list and a diagnosis, and then it's on to the next topic.  Even ignoring the ICZN, that's no way to propose a new taxon.

Next up, "Liassaurus", then probably a couple more taxa to round out the month.
Posted by Mickey Mortimer at 8:29 PM