Are uncinate processes ancestral to Archosauria? A look at Wang et al 2023 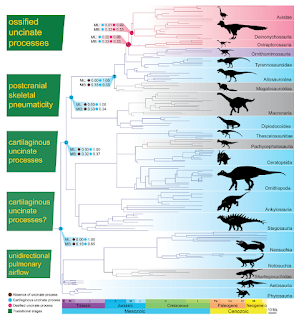 It turns out the identity of the Mystery Nine is in Table 2 of the Supplementary Information, under Alternate Coding.  In the preceding paragraph they again report "Under the alternate coding method, nine taxa were scored as lacking uncinate processes."  These taxa are- Lotosaurus, Protosuchus, Lagerpeton, Plateosaurus, Anchisaurus, Camarasaurus, Camptosaurus, Parasaurolophus, Edmontosaurus, Protoceratops and Chasmosaurus.  Wait, that's actually eleven taxa, not nine, despite the number nine being stated three times.  On the one hand, note none of these are shartegosuchids, pachycephalosaurs, or megalosauroids, so why are those clades even in the cladogram?!  On the other hand, note that Lotosaurus and Protosuchus would make two gray nodes basal to mesoeucrocodylians, Lagerpeton would be a gray node basal to dinosaurs, and Plateosaurus and Anchisaurus would be two extra gray nodes basal to sauropods.  Also all of the Ornithopoda and Ceratopsida [sic] branches are blue when they shouldn't be.  So the figure is putting in artificial discrepancy and leaving out most of the actual discrepancy.

So not strongly supporting "deep reptilian evolutionary roots of a major avian respiratory adaptation", and that's not even going into how the only non-avian paravians they scored were four dromaeosaurids (Microraptor, Saurornitholestes, Velociraptor and Deinonychus) with ossified processes, when at least Archaeopteryx, anchiornithines and omnivoropteryids lacked them, so anything about Pennaraptora's ancestral state is going to need more than "oviraptorosaurs, dromaeosaurids, Rhea, Gallus and Lithornis - yes, Chauna - no."

And yeah, the living bird Chauna has no uncinate processes and lacks any scars for them, so was rightfully scored 0.  Yet fossil taxa with the same morphology were scored unknown.  Which again points to the flaw in their Preferred Coding, but also suggests we might expect homoplasy in other parts of Archosauria as well.  So lambeosaurines and edmontosaurins could have lacked uncinates while kritosaurins had them, following the osteological evidence, for instance.

In conclusion, it's an excellent idea to look for osteological correlates to unossified uncinate processes, and we got some real data hidden in the supplementary information, but any use was marred by unforced errors like a misleading main figure and a nonsensical scoring methodology.  I wouldn't doubt uncinates were primitive to at least averostrans, given "Sidormimus" and Edmarka (check Figure 14A of Bakker et al., 1992; so Megalosauroidea should have ironically been blue), but the concept deserved better vetting than this.

References- Bakker, Kralis, Siegwarth and Filla, 1992. Edmarka rex, a new, gigantic theropod dinosaur from the Middle Morrison Formation, Late Jurassic of the Como Bluff outcrop, with comments on the evolution of the chest region and shoulder in theropods and birds and a discussion of the five cycles of originn and extinction among giant dinosaurian predators. Hunteria. 2(9), 1-24.

Wang, Sullivan and LeBlanc, 2020. Anatomical and histological data indicate uncinate processes to be homologous across Archosauria. Journal of Vertebrate Paleontology. Program and Abstracts 2020, 334.

Posted by Mickey Mortimer at 7:40 AM