Basal coelurosaurs in the Lori matrix

Okay, I'm on vacation and one of those goals is to get these blog posts out about the results of the Hesperornithoides analysis of Hartman et al. (2019), and the Theropod Database updated again.  With that in mind, here's our first section. 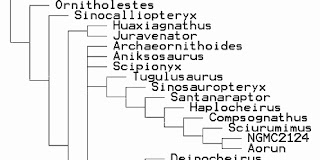 Aristosuchus was analyzed, but is not in the cladogram.  We found it to be a coelurosaur closer to Aves than Megaraptora, excluded from Maniraptoriformes.  So it could be a basal tyrannosauroid or a compsognathid, or something in between.

I was able to examine the Ornitholestes holotype at the AMNH twice, and get some nice photos I've been posting here over the years.  Besides taking 10 steps to move to Tyrannosauroidea, it takes 7 steps to move outside Tyrannoraptora, 13 steps to move to Maniraptora, and a whopping 30 steps to move to Dromaeosauridae.  Should be the nail in the coffin for that idea.

Sinocalliopteryx emerged basal to compsognathids, but moves to Compsognathidae in 4 steps and joins basal tyrannosauroids in 1 step.  Might be worth reexamining its relationship with Dilong.

Huaxiagnathus and Juravenator join to form a clade basal to compsognathids, but can join that family in a single step.  They take 7 steps to move closer to Dilong, so are probably not tyrannosauroids.

Archaeornithoides is a highly controversial taxon, which I was the first to include in a published analysis.  While it most parsimoniously is down here at the compsognathid-grade, only 1 step moves it to Paraves.  There it groups with Xiaotingia and Mei as a sinovenatorine instead of by any known Djadochta troodontids.

Aniksosaurus emerged down here too, more crownward than its original description.  There, Martinez and Novas (2006) proposed Aniksosaurus was a coelurosaur outside Maniraptoriformes, the latter containing tyrannosaurids in their phylogeny.  While not included in a phylogenetic analysis, they did list three characters supporting this placement.  "Distal tibia with astragalar surface proportionally low" is also true in basal tyrannosauroids (Coelurus, Guanlong) and maniraptoromorphs (Aorun, Compsognathus, alvarezsauroids including Nqwebasaurus).  "Insertion of the M. caudifemoralis longus extensive and deep"  is plesiomorphic for maniraptoromorphs, also being found in Ornitholestes, Juravenator and all ornithomimosaurs.  Robust limb elements were stated to resemble carnosaurs and megalosauroids more than most coelurosaurs, specifically the humerus, ulna, femur, tibia and pes.  The humerus is also robust in compsognathids and alvarezsaurids, while the metatarsus is less robust than Ornitholestes, therizinosaurs or Deinocheirus.  However, any measure of basic robusticity such as femoral circumference should also account for size correlation as larger taxa are typically less gracile than smaller taxa.  Brusatte (2013:395) stated "it is unclear if it possesses any clear coelurosaurian characters" so did not include it in his TWiG analysis.  However, every analysis including Aniksosaurus has recovered it within Coelurosauria, and only unquantified appendicular robusticity has even been suggested to validly support a more rootward placement than Tyrannoraptora.  While I've previously suggested some alvarezsauroid-like characters (e.g. large presacral neural canals*, ventrally keeled proximal caudal centra, transversely broad manual ungual I*, laterally expanded brevis shelf*, distally projecting lateral femoral condyle), enforcing this result in the Hartman et al. matrix adds 9 steps.  However, the asterisked characters were not included, so it could potentially only be 6 steps longer.

Scipionyx gets a pretty traditional position with not much to say.

Tugulusaurus is a compsognathid here but is historically a very basal coelurosaur, and more recently an alvarezsauroid by Xu et al. (2018).  Check the Database for details, but basically I found basal placements were due to the same three characters, which probably converged in derived tyrannoraptorans and derived maniraptoromorphs.  The position in Alvarezsauroidea was based on four characters I didn't examine ("strong medial tab on metacarpal [I]"; "dorsolaterally and dorsomedially facing lateral and medial surfaces of phalanx [I]-1 that are shallowly concave"; "axial furrow along the flexor surface of phalanx [I]-1"; "partially enclosed ‘flexor notches’ on the medial and lateral surfaces of the proximal end of the ventral surface of manual ungual [I]-2"), while it takes 5 more steps to force as an alvarezsauroid in the Lori matrix.  Thus the true difference between a compsognathid and alvarezsauroid placement could be as low as a single step.

Sinosauropteryx is also fairly boring, but photos of NIGP 127587 sent by Senter show that some aspects of its figures in Currie and Chen (2001) aren't preserved in the actual material.

Santanaraptor gets another long entry, regarding the evidence for tyrannosauroid affinities.  Basically almost all of the claimed characters don't exist in Santanaraptor or are impossible to check based on published material and that sent by Bruno Campos.

Haplocheirus was a surprise as a compsognathid.  I know I've seen it outside Alvarezsauroidea in more analyses than Lee and Worthy (2011).  Any of you readers remember which?  One interesting thing I noticed when moving this entry is that the supposedly autapomorphic dorsally expanded anterior dentary with enlarged teeth is present in all other compsognathids, but the character wasn't included in the Lori analysis.  That's always a good sign when it comes to a position's plausibility.

Compsognathus takes 8 steps to be maniraptoran, 13 to be tyrannosauroid and 15 to be outside Tyrannoraptora.  While I did not split the specimens as separate OTUs, they do differ in 16 characters, so I plan to in the future.

Sciurumimus gets a HUGE section in the supplementary info of the Lori paper.  Rauhut asked us to justify its inclusion in the analysis when it's supposed to be a megalosauroid.  So I fully reexamined Rauhut et al.''s (2012) analyses of Sciurumimus in the various analyses and found misscorings in each (Smith et al., 2008; Benson et al., 2010; Choiniere et al., 2010) were responsible for keeping it away from Compsognathus.  So there's no mystery as to why Juravenator moved to a basal position when Sciurumimus was included but was a coelurosaur when it wasn't, it's just misscorings.

NGMC 2124 is the Sinosauropteryx sp. of Ji and Ji (1997) and has never been included in an analysis before this.  It ends up closer to other compsognathids than Sinosauropteryx, but only takes 3 steps to group with the latter genus.  I examined this one in person when it was on display at the RTMP.

Finally, we have Aorun.  Xu et al. (2018) recently proposed this is the basalmost alvarezsauroid based on four unambiguous synapomorphies- dorsoventrally flattened internarial bar; collateral ligament fossae on metacarpal I absent; manual digit I bearing large ungual and all other unguals distinctly smaller; proximodistally oriented step-like ridge on anterior surface of tibia that braces astragalar ascending process.  We recovered Aorun as a compsognathid, and found it takes 17 more steps to move to Alvarezsauroidea.  This is similar to Cau's (2018) results, where Aorun and Compsognathus are both non-tyrannoraptoran coelurosaurs and can form a Compsognathidae with no extra steps, but it takes 9 extra steps to force an alvarezsauroid Aorun.  Notably, even Xu et al.'s matrix only needs 4 steps to move Aorun to Compsognathidae.  Of Xu et al.'s proposed alvarezsauroid characters, the flattened internarial bar was used by us and is shared with the controversially compsognathid Haplocheirus.  Aorun actually seems to have a weak medial ligament pit on metacarpal I (Choiniere et al., 2013: Fig. 15A).  The ratio between manual ungual I and II lengths (1.28) in Aorun is not more than Sciurumimus (~1.29) or Sinosauropteryx (~1.79).  Finally, the ridge bracing the astragalar ascending process is primitive for maniraptoriforms and also present in Compsognathus and Tugulusaurus.  Thus a compsognathid identity is the best supported given proposed characters.

I was curious with Tugulusaurus, Haplocheirus and Aorun each recovered as alvarezsauroid by Xu et al. and compsognathid by me, is there some unseen connection between the clades?  Enforcing them to be more closely related to each other than to other groups takes 15 more steps, so apparently it's not a great hypothesis.