While again too poor to attend SVP, I thought I would provide my thoughts on the abstracts that interest me like I did last year.  The abstracts book can be download free at this link.  When adding abstracts to the Database, I noticed an issue that's been constant throughout the years- the titles are in UPPERCASE.  This makes copying them useless, which means everyone citing abstracts has to rewrite them.  This can only lead to more typos and serves no obvious purpose since the titles are already bolded to distinguish them from the rest of the text.  Does anyone else agree they should have normal capitalization?

This year there are no less than three abstracts marked as WITHDRAWN.  One is by Egberts and concerns wearing gloves when handling specimens to prevent skin oils damaging the fossils.  Another is by Spindler, about a supposed Carboniferous therapsid specimen.  The third by Parsons and Parsons involves aerial forelimb motion in Bambiraptor and Deinonychus.  I wonder why these three abstracts didn't make it.

Wilson reports that of three histologically sampled Pteranodon specimens, the largest and smallest are rather mature, while the medium-sized one is immature.  While she interprets this to mean "there may be a large amount of adult body size variation in Pteranodon" or possibly that "the smallest specimen sampled is from a large Nyctosaurus specimen", Peters' idea of taxonomic instead of ontogenetic variation in Pteranodon seems viable too.  Is this a case of Peters being right?

Andres (and posthumously Langston) signal the beginning to the end of the deplorable situation pterosaur workers have been in where Quetzalcoatlus' holotype has been inaccessible due to the TMM embargoing it for decades.  All it took was the eventual death of the person monographing it.  :|  Now if we can just get Pelecanimimus out of the same rut, so that those who have the thesis describing it will distribute it and allow others to photograph the material described over two decades ago... 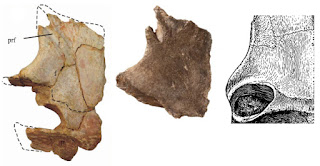 
Moore et al. report on new Bellusaurus cranial elements, juvenile like the previously known material.  Interestingly, these support a macronarian position, and close relationship with Europasaurus.  No update on the oft-hypothesized synonymy with Klamelisaurus, as that genus only preserves teeth and postcrania.

Finally, we have the abstract supposedly authored by Chinzorig, Kobayashi, Tsogtbaatar, Mahito, Rinchen and Shigeru...?  Someone messed up somewhere, because of course the actual authorship using surnames should be Tsogtbaatar, Kobayashi, Tsogtbaatar, Watabe, Barsbold and Suzuki.  This one's going to be tedious to find/cite in the future.  The find itself is a diagnostic ornithomimid tarsus and pes from the Djadokhta Formation of Mongolia, unfortunately not comparable to the previously described cranial and vertebral material (IGM 100/987 and 100/1245) from that formation.

Join me tomorrow for Day 2 talks and posters...

References- Gilmore, 1925. A nearly complete articulated skeleton of Camarasaurus, a saurischian dinosaur from the Dinosaur National Monument. Memoirs of the Carnegie Museum. 10, 347-384.