Macrodontophion is not a tooth

Comments- This genus was not given a species name when described by Zborzewski (1834). Macrodontophion's holotype was described as a snake tooth close to ophisaurs (actually anguid lizards) and pythons. It was also said to be similar to rhyncholites (cephalopod mandibles) and Beloptera (a spirulid cephalopod). Because Megalosaurus was mentioned in the same paragraph that the name first appears (the description proper is in the plate explanation), it was assigned to Megalosauridae by general reviews in the 1900's (e.g. Romer, 1956; Steel, 1970), and stated to be an indeterminate theropod by Weishampel (1990). Zborzewski tentatively referred it to the Jurassic, Molnar (1990) described its age as Late Jurassic or Cretaceous, and Weishampel assigned it to the Jurassic Nikolayevskaya Oblast based on personal comminication from Kurzanov. However, Nessov (1995) suggested its age was Early Devonian based on the geology of the region, Zborzewski's description of the locality as "ancient red sandstone" rich in lizard and snake teeth, comparable to the red strata in the Early Devonian Dniester Series which is rich in Porolepis teeth. 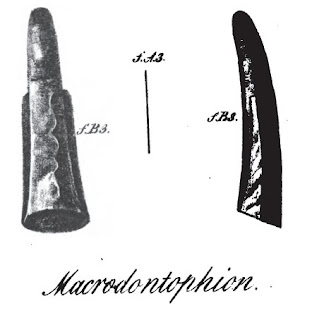 Macrodontophion holotype in two views (after Zborzewski, 1834).
Molnar noted the insignificant distal taper was unlike theropod teeth and could not verify it was dinosaurian, though in pers. comm. to Olshevsky (2000) he stated it could be crocodilian or plesiosaurian, and in 1991 pers. comm. with Glut (1997) stated the abruptly flared base and lateral crests are similar to some shells. Sues (pers. comm. 1988 in Glut, 1997) also believed it was nondinosaurian. Nessov noted several characters which differ from theropod teeth- curvature perpendicular to plane of lateral crests (carinae of theropods); rounded apex; winding crest along inside edge of curve on long axis of tooth. Nessov believed that among Devonion fossils, Macrodontophion was most similar to the distal pectoral spine of an antiarch placoderm. While I agree the specimen is certainly not theropod, it does not resemble antiarch pectoral spines either. These spines are ironically like theropod teeth in being flattened parallel to their plane of curvature, lack the basal flare of Macrodontophion, and consist of numerous plates unlike the latter taxon. Even if most of Macrodontophion is an internal mold, the lateral crests seem to be made of one piece each and are too large to be single plates of an antiarch spine. Another possibility is the cornual process of an osteostracan or heterostracan, which are common in the Dniester Series (Dumbrava and Blieck, 2005; Voichyshyn, 2006). These are made of a single component, but still flattened in the plane of curvature. I believe an internal mold of a mollusk or annelid shell is most likely as an identification. Hyoliths, for instance, can have conical shells which are curved perpendicular to their axis of flattening, as in Macrodontophion. Yet hyoliths seem to lack the basal flare and have a more triangular section than the oval drawn for Macrodontophion. A large number of conical Palaeozoic shells are known which have controversial and problematic identifications, generally as hyoliths, scaphopods, nautiloids, cornulitids, coleolids or even worm tubes. Until Macrodontophion is examined by an expert in these taxa, it is probably best to keep it as Lophotrochozoa incertae sedis.

Dumbrava and Blieck, 2005. Review of the pteraspidiform heterostracans (Vertebrata, Agnatha) from the Devonian of Podolia, Ukraine, in the Theodor Vascautanu collection, Bucharest, Romania. Acta Palaeontologica Romianiae. 5, 163-171.