Basal theropods in the Lori analysis

In lieu of my original post plan, I just got results from Scott on the most recent analysis of the Lori matrix.  This includes the Archaeopteryx, Ichthyornis and confuciusornithid skull updates unlike the version in the manuscript, plus some added taxa.  The good news is that basic maniraptoromorph topology and Lori's position stayed the same, but you won't be getting any of that today.  Previously, I looked at the non-theropod Lori matrix topology to demonstrate how using maniraptoromorph characters for basal dinosauromorphs will fail even given several hundred accurately scored characters with complete taxonomic coverage.  Well, here's the non-tyrannoraptoran results of the full taxonomic coverage analysis.  It's a majority rule tree, and you can see that fragmentary taxa can fall out in the wrong place due to both a lack of certain characters and the vagaries of tree generation.  So no, I don't think Archaeornithomimus bissektensis' holotype femur is abelisaurian, and the analysis presumably found it to fall out in numerous positions within Avepoda in the most parsimonious trees.  But this gives you a good overall view of what the Lori characters have to say, and it's pretty interesting in some areas.  I would never publish this tree without including characters relevant to carnosaurian, megalosauroid, ceratosaurian, etc. phylogeny, so I don't mind sharing it here. 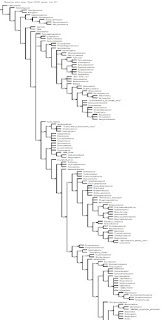 It's largely good.  The weirdest part is tetanurine coelophysoids.  Also odd is that Sciurumimus and Chuandongocoelurus don't fall out close to their published positions.  Gualicho is a ceratosaur here, so take take from that what you will.  Valdoraptor emerged as a ceratosaur, but the Angeac taxon came out as an ornithomimosaur and Thecocoelurus as a therizinosaur.  None of these taxa are in the Lori manuscript matrix since they had such unstable positions and so little of the Angeac taxon has been published (based on the mounted specimen, it looks very ceratosaurian).  The coelophysoid grade section actually looks pretty good.  Gasosaurus as a piatnitzkysaurid?  Reminds me of PDW.  Xuanhanosaurus and the contemporaneous Kaijiangosaurus sisters?  Synonyms?  I'm rather surprised at the retention of Megalosauroidea, which I usually think is a tenuous grouping.  I don't trust the structure in it, though there is a Spinosauridae (with probably wrongly placed Magnosaurus).  We get a paraphyletic sinraptorid base instead of a big Carnosauria.  Yangchuanosaur Bicentenaria might be worth looking into.  Australovenator and Fukuiraptor are allosaurids/carnosaurs unlike other megaraptorans.  Congrats, Molnar. ;)  Kelmayisaurus as a carcharodontosaur is surprisingly in line with Brusatte et al.'s results given how fragmentary the material is, and Labocania as one is certainly interesting.  Megaraptorans sister to Tyrannoraptora has been my pet hypothesis for a while and shows up again.  Hmm.

It all goes to show you that you can't just take one character list and expect it to give you the right results.  Topology is highly dependent on both character and taxon inclusion, and even if a matrix has more taxa and/or characters than another, you should never trust it to be better unless it includes all the competing data.
Posted by Mickey Mortimer at 1:02 AM