Picture of the Day- Ornitholestes

Ah, Ornitholestes.  Such a well known dinosaur, but with so many mysteries and misconceptions.  Of course, everyone knows by now that the supposed horn above the naris identified by Paul (1988) is really taphonomic. 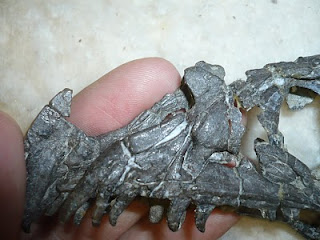 Snout in left lateral view (copyright AMNH).  Note the many ways I failed SVPOW photo taking guidelines. ;)
Everyone also knows the manus (AMNH 587) referred to it has been reassigned to Tanycolagreus.  You might also realize that Carpenter et al. (2005) incorrectly state only one humerus is known, do not mention the ulnar or left radial fragments, incorrectly list metacarpal II or III as being preserved, as well as fragments of two other metacarpals, and only mention one of the two manual unguals.  Senter (2006) did a nice job of describing this forelimb material. 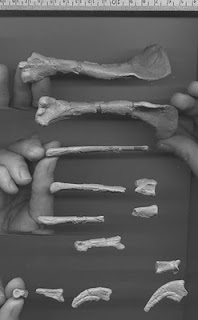 Humeri in anterior view, five radial and ulnar fragments, metacarpal I, phalanges and two manual unguals.
For a while (Gilmore, 1920 to Ostrom, 1980) Ornitholestes was thought to be synonymous with Coelurus, and even after this mistake was realized it was not uncommon to find illustrations of Coelurus' skull or head obviously based on Ornitholestes.  In reality, Coelurus' skull is only known from a partial dentary.  Less well known is that even though Paul described the taxon as having unusually short lower legs, the tibiae are not preserved and only the proximal fibula is known (though not mentioned by Carpenter et al.). 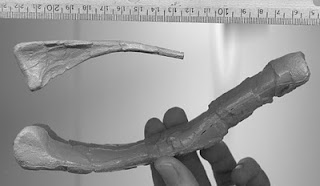 Incomplete fibla and femur in medial view.
Another fun fact about Ornitholestes is that it had an enlarged ungual on pedal digit II.  It seems like a big deal than a non-paravian would have one, but barely anyone mentions it.  You can even see a raised distal articular surface on pedal phalanx II-1 (as was recently described in Archaeopteryx) suggesting hyperextensibility. 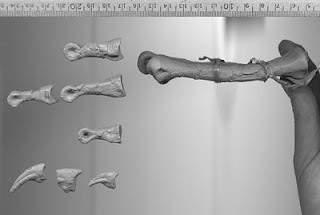 Metatarsus, pedal phalanges and pedal unguals in medial view.  Note base of large pedal ungual II and dorsally projecting distal articulation on II-1 at top.
Finally, we have its phylogenetic position.  It's been seen as everything from a carnosaur (Paul, 1988) to a deinonychosaur (Makovicky, 1995), with most authors finding something intermediate.  The cast pictures are courtesy of Phil Senter, the snout pic is one I took.


Gilmore, 1920. Osteology of the carnivorous Dinosauria in the United States National Museum, with special reference to the genera Antrodemus (Allosaurus) and Ceratosaurus. Bull. U. S. Nat. Mus. CX 1-154, 36 pls., 78 text-figs.

Ostrom, 1980. Coelurus and Ornitholestes: are they the same? In Jacobs, L. (ed.) Aspects of Vertebrate History. Flagstaff, Museum of Northern Arizona Press. 245-256.

Paul, 1988. The small predatory dinosaurs of the mid-Mesozoic: the horned theropods of the Morrison and Great Oolite - Ornitholestes and Proceratosaurus - and the sickleclaw theropods of the Cloverly, Djadokhta, and Judith River - Deinonychus, Velociraptor, and Saurornitholestes. Hunteria. 2(4), 1-9.