... ever found, that is.  The avialan alvarezsaur post is taking a while since there have been 95 proposed characters supporting it, and Choiniere et al. include more of them.  In the mean time, now that I have a blog, I get to do filler posts pictures of the day.  So here's AMNH 6524, the first alvarezsaurid discovered, back in 1923.  Back then it was only identified as a bird-like dinosaur. It was not until 1993 that it was identified as an alvarezsaurid (Norell et al., 1993). Originally identified as Mononykus, it is more likely Shuvuuia or Parvicursor as it is from the Djadokhta Formation.  It's mostly too damaged to see useful details in, but in the upper right you can see the parallel pubis and ischium with broad contact, a parvicursorine synapomorphy. 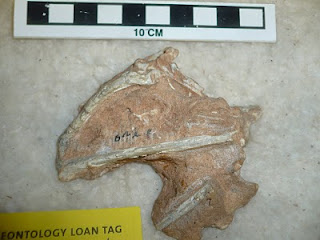