Thanks to everyone for their comments!  Don't expect daily posts to be the norm, but I've been studying "Poekilopleuron" schmidti, so on to post number two.  This is another obscure Russian theropod described briefly and thrown into Megalosauridae or Theropoda indet. ever since.  It has the additional notoriety of having its main element reidentified 90 years after it was described, but looking at the figures, I don't think either identification is correct. 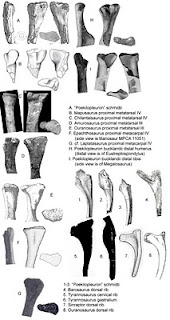 Diagnosis- chimaera with no diagnostic elements.

Previous diagnoses- Kiprijanow (1883) did not provide a formal diagnosis, but differentiated P. schmidti from P. bucklandii based on its later age and geographic separation. While the former near certainly means it is not conspecific, stratigraphy and biogeography are not currently viewed as valid criteria for erecting a new species.

Comments- Kiprijanow (1883) described Poekilopleuron schmidti based on a diapophysis and four small shaft fragments from the axial skeleton. He referred it to the Seweri Osteolith, which was recognized as being of Gault age (Albian). Molnar (1990) noted its age was difficult to determine, but stated it appeared to be Cenomanian-Santonian. Nessov (1995) believed it was Albian-Cenomanian instead based on his study of the area and also noted Neogene mammal fossils were present. While no catalogue numbers or repository were given by Kiprijanow, Storrs et al. (2000) stated his material is presumably in the Russian Academy of Sciences in St. Petersburg.

The diapophysis is large, about 132 mm wide at its end. The shaft is cylindrical and apparently hollow, with a bone wall to diameter ratio of ~23%. The end is asymmetrically expanded primarily in one plane, with one corner projecting to the side and end significantly more than the other. The less projected corner has the broken base of a large bump on one side, and a lower but more proximodistally elongate bump on the other side, the latter bump placed closer to the midline. Though saddle-shaped in one view, the distal surface appears irregularly bumpy in another, and no obvious condyles exist. The end's outline is roughly shaped like a flattened parallelogram, with one of the short sides being about twice as long as its opposite.

There are four small shaft fragments illustrated (table IV, figures 1-3). All are slightly curved with one end (proximal?) gently expanded, and broken both proximally and distally (minimum shaft width ~20-26 mm). It is difficult to tell which proximal edges are broken and which are natural. The element in figure 1 has a longitudinal ridge down the center of one side with fossae (perhaps caused by crushing) on either side of it at the proximal end. The proximal cross section (figure 1C) is very flat except for the ridge. The element in figure 3 is flat on both sides and has a triangular cross section distally (figure 3C'). Figure 2 seemingly consists of two elements judging by their different lengths, with 2A having a rounded surface and 2B having a longitudinally ridged surface.

Kiprijanow referred this material to Poekilopleuron (then thought to be a crocodile) because he thought the form of the elements was identical. However this is obviously not so as even if there is a general resemblence to Poekilopleuron's distal humerus in anterior view, side view shows at the very least schmidti lacks Poekilopleuron's deltopectoral crest. Further differences from theropod humeri are mentioned below. Rozhdestvensky (1973) reidentified the diapophysis as a distal tibia, referring it to Megalosaurus sp. (he included Poekilopleuron in that genus as well). This may be the origin of Olshevsky's (1991) combination Megalosaurus schmidti (listed as a junior synonym of P. schmidti), as it is not possible to sink a named species into "sp.", regardless of how undiagnostic it is. It would be quite coincidental if schmidti were still referrable to the same kind of animal, after the one somewhat diagnostic fragment's position was reinterpreted. Yet schmidti differs from both Poekilopleuron and Megalosaurus in lacking a shelf for the astragalar ascending process and sharply tapered lateral edge in distal view. Efimov and Chkhikvadze (1987) in a review of Soviet crocodilians, believed schmidti to be dinosaurian. Molnar stated it "could belong to almost any large Late Cretaceous theropod" and referred it to Theropoda indet., but no known theropod has a similar distal tibia, leading me to doubt its identity (see below). Molnar later (pers. comm. to Olshevsky, 1991) stated it may be ceratosaurid, but Ceratosaurus differs in the same major ways as Megalosaurus and Poekilopleuron. Nessov was doubtful of its theropod identity, based on a "slit-like pit" on the more broken side, "separating the region of contact with other bones from the side of the diaphysis." I'm unsure which feature Nessov was referring to, though the bone does have many cracks and small pits, the latter largely from wear showing the internal texture. Nessov thought the rib fragments were not obviously dinosaurian and probably belonged to marine reptiles (he discovered ichthyosaur remains at the site). Holtz et al. (2004) listed it as Tetanurae indet. without comment. Poekilopleuron schmidti is generally listed as Theropoda indet. in modern references.

The diapophysis was identified by Kiprijanow as a distal humerus and Rozhdestvensky as a distal tibia. However, it differs from both of these elements. Dinosaurian humeri have more symmetrical distal outlines as opposed to schmidti's one side being much deeper. Both condyles in theropods are usually projected anteriorly and rounded in side view, whereas schmidti has a prominent and elongate projection on only one side and tapers towards the end in side view. Most non-coelurosaur theropod tibiae have a deep shelf projecting diagonally across the anterior end for reception of the astragalar ascending process, which is lacking in schmidti. Coelurosaurs and a few other taxa lack this shelf, but always have a much shallower distal end which is strongly tapered on one side. This distal outline is even true of basal taxa like ceratosaurs and megalosauroids (though not the much earlier coelophysoids, which differ more strongly in having even deeper astragalar shelves), while coelurosaurs exaggerate it further. Another point of difference is that theropod tibial shafts are wider compared to the width of their distal transverse flare. Other dinosaur tibiae differ as well, with ornithopods having a very strongly projected lateral flange for instance. While schmidti bears a general resemblence to a proximal tibia, it lacks all the detailed features one would expect- posterior intercondylar groove, fibular crest, lateral condyle. Similarly, proximal fibulae are narrower, and ulnae more triangular in proximal view. An exhaustive comparison of dinosaur limb elements indicates it is near certainly a metapodial. The closest resemblence among theropods is to the proximal end of metatarsal IV of large carnosaurs such as Mapusaurus (mislabeled II in its description) and Chilantaisaurus. The primary differences are schmidti would have a flat anterior edge and a narrower shaft. Another similar element is metatarsal III in hadrosauriforms, but these differ in being broader proximally and having a more pronounced anteroproximal projection. More importantly, the anterior surface would be oddly angled in schmidti and it lacks the anteroposterior expansion distally which is a consequence of hadrosauriforms' short metatarsi. This makes it an unlikely identification. The most similar element I could find among dinosaurs is the proximal end of metacarpal IV of titanosauriforms. cf. Laplatasaurus' metacarpal IV is nearly identical in proximal view, while Epachthosaurus' is a close match in lateral view. The size is also well within the range of titanosauriforms, while only giant theropods are of comparable size. One point of contention is that schmidti's element is illustrated and described as being hollow, but it's possible this is taphonomic as the end is broken and extensively fractured, perhaps leading to the loss of a spongy interior as often happens in recent mammal bones. Unfortunately, if we accept the sauropod identification there is a high degree of variation ontogenetically/intraspecifically, so the element is Titanosauriformes indet.. Most other sauropods had stouter metacarpals and were extinct by the Mid Cretaceous in any case.

Kiprijanow identified the shaft fragments as ribs without specifying which part of the vertebral column they derived from. Molnar merely said they may be fragments of ribs, while Nessov thought they probably belonged to marine reptiles. There is no evidence they belong to the same animal as the metapodial, as Kiprijanow only says they "were found all together in the Seweri Osteolith" and were fossilized identically. Unfortunately, dinosaurian rib morphology has been largely ignored by most authors so comparison is difficult. Despite this, comparison to theropod, sauropod and ornithopod dorsal ribs shows at least two of the elements differ in having the proximal broad area too proximodistally extensive compared to shaft width. In this they are more similar to theropod cervical ribs, such as those of Tyrannosaurus. Assuming they are theropod cervical ribs, they are not from abelisaurs since their shafts lack a flange. The concave and possibly crushed areas on the one specimen might suggest pneumaticity as is common in neotheropods, however the cross section shows it is solid. They are also roughly similar to sauropod cervical ribs, though in medial view sauropods have a strut extending perpendicular to the shaft from the tuberculum which is missing in schmidti. Another possibility for at least some of the elements is that they are the medial ends of of medial theropod gastralia (other dinosaurs of the time lacked gastralia), which share the slightly expanded end and transition from plate-like medial portion to rod-like lateral portion. In either case they are undiagnostic and Nessov's suggestion they belong to ichthyosaurs or plesiosaurs should be seriously considered as well, by someone more familiar with those animals than I am. Kiprijanow devotes several figures and most of his description to schmidti's histology, which could prove useful to someone knowledgable on that subject.

Rozhdestvensky, 1973. [The study of Cretaceous reptiles in Russia]. Paleontologischeskii Zhurnal. 1973, 90-99.

Efimov and Chkhikvadze, 1987. The review of finds of fossil Crocodiles of the USSR. Procedings of the Academy of Sciences of the Georgian SSR. 13(3), 200-207.

Storrs, Arkhangelskii and Efimov, 2000. Mesozoic marine reptiles of Russia and other former Soviet republics. in Benton, Shishkin, Unwin and Kurochkin (eds.). The Age of Dinosaurs in Russia and Mongolia. Cambridge University Press. 187-210.


So, do you agree with my assessment based on the figures?  Who knew it was a sauropod?!  It's only my second post and I'm barging in on SV-POW's territory.  What's next for the blog?  Probably not another obscure Soviet 'megalosaur' described before WWII.  I might branch out to some other part of Asia at least.  As before, write me at Mickey_Mortimer111@msn.com for a copy of the description in all its German histological glory.
Posted by Mickey Mortimer at 2:57 AM